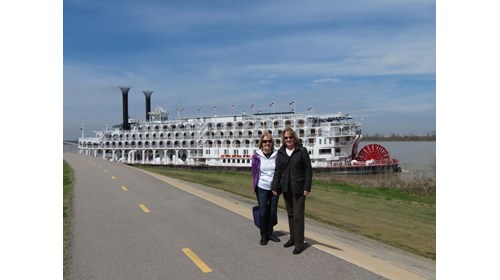 The Mississippi and The American Queen

With - at the time - five off-North America River cruises under our belts, we decided to try something a bit closer to home. Residing in Largo, close to St. Petersburg, Florida, we drove the eight hours along the Florida panhandle to New Orleans. Staying in a hotel close to the French Quarter allowed us to have a day and a half exploring this historic area. The beautiful architecture, narrow streets with overhanging wrought iron balconies, street performers, jazz bands and speakeasies not to mention the fantastic array of quality restaurants made our time there very special. And the fact that my wife, Debbie, was celebrating her birthday at one of the finer restaurants really helped make her day, when the four piece jazz combo came to our table and sang happy birthday to her, jazz style!

The French Quarter market brought out some interesting surprises as we made our way through this busy area: all of the different things for sale from Alligator heads to strange and wonderful cuisine to original art! And when our travel companion tried a drink called “the Hurricane”, I warned her, as I had looked at the copious amounts of various alcohol involved… but she didn’t listen - and paid the price!

The N’awlins waterfront was very charming and the day-trip small sternwheeler, the Natchez, was fun to watch as it set off from the shore, calliope (like a small piano with whistles sounded by steam) tooting away.

As we boarded the glorious refurbished sternwheeler, the American Queen, my thoughts turned to the turn of the century (19th century) when sternwheelers plied the Mississippi in great numbers. Thoughts of Mark Twain, Tom Sawyer and Huckleberry Finn crept into my mind as we walked through this beautiful ship and looked at historical pictures and memorabilia scattered plentifully throughout dark interior of the ship.

Our cabin was on the top deck – a cabin for 3 – and it was an excellent location because it allowed us to look over the levies constructed on parts of the Mississippi to protect against flooding. Stately mansions, lined with ancient , sprawling oak trees which would have been hidden from eyes on lower decks were easily visible from the top deck.

Our itinerary was round trip New Orleans but there are other options available. The ship which, in my opinion, combined the best of both worlds – river and ocean cruise - was a delight: large dining area with superb food options for reservations, with smaller dining area at back of ship, a large stage area where there was nightly entertainment similar in style to ocean cruise ships, not the modest entertainment of a typical river cruise. Otherwise there were the typical included excursions by bus that followed the ship along the river.

There were other optional excursions which we could have purchased for additional money but we found what was included gave a good view of the mansions and slave quarters, the intolerable conditions (even to this day) of Angola Prison, the civil war history of the area, the to-this-day busy-ness of the Mississippi River itself and the culture and cuisine of the area.

To sum up: while this cruise, for me, did not have the depth of history of a typical European cruise, the combination of a ship that HAS NO PARALLEL in the river cruise industry, together with the cuisine and the Mississippi experience made this a very memorable trip and one that did not require an expensive and long flight across the Atlantic.